“What Sentis has delivered is fantastic. They have surpassed the requirements we originally had for our infrastructure and made annual savings well into five figures.” 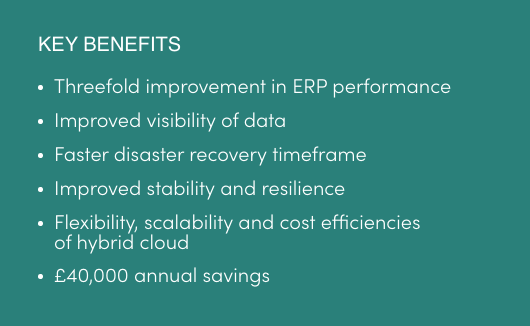 Stewart Company is the leading UK manufacturer of injection and rotationally moulded products for the gardening, home and professional catering sectors. Now 70 years old, the company thoroughly understands the need to be innovative and forward-thinking in order to thrive.

When Shirley O’Connell, the Stewart Company’s Logistics and Business Services Director, was contacted by Sentis Managed Solutions, little did she realise the impact it would ultimately have on the business.

Shirley sets the scene: “During our initial conversation, we talked about what systems we had in place and how they had coped since we moved facility three years prior. We also discussed the performance of our systems and spoke in broader terms about how the world of IT had significantly advanced in the intervening three years.”

Stewart’s existing infrastructure comprised four core elements. Three ran on dedicated in-house servers, including a warehousing system. All three servers backed up locally and were covered by a contracted break/fix service in the event that disaster recovery was required.

The fourth element was a cloud-hosted ERP application: SYSPRO. “When we looked at why we had opted to put SYSPRO in the cloud, the logic for that decision was still perfectly sound. As a platform, the cloud is resilient, robust and secure. We also didn’t have to worry about disaster recovery or backups as that was all built into the cloud offering.”

But whilst the system worked, Shirley recognised that it had some shortcomings. “It was with this in the back of my mind that we began to really appreciate the Sentis approach. Rather than simply accept the status quo and focus on refreshing our hardware to improve the existing infrastructure, they really got under the skin of our business to understand what we needed to operate now and into the foreseeable future.”

That deep understanding of the business highlighted some critical issues. The cloud-hosted SYSPRO software had a tendency to slow down, become unresponsive and even disconnect, leaving, as Shirley puts it, a very frustrated user group.

Shirley continues: “As we got more of an understanding of what we actually had compared to what we needed, the cloud environment for running SYSPRO began to look less appealing. Critically, while SYSPRO was in the cloud, our warehousing application had to be locally hosted. That placed limitations on the level of integration between the two systems and it was not sufficient to make the most of our Business Intelligence tools. That felt like an opportunity missed.

“So, we were faced with a solution that didn’t provide the performance we wanted, didn’t allow our systems to integrate with one another and that precluded us from using the Business Intelligence tools at our disposal. The one upside was that it did provide the security blanket that comes as part and parcel of the cloud.”

At this stage in the process, the Stewart Company asked their incumbent provider, two other companies and Sentis to put forward proposals.

When the proposals were put forward, Shirley was surprised by the options: “The three other companies effectively offered us the same solution we were using at the time, whereas Sentis put forward a hybrid-cloud solution that was radically different. It also offered substantial benefits, not least a significant cost saving.

“The solution that Sentis proposed was far more holistic and involved migrating Stewart Company’s SYSPRO ERP away from the cloud onto an in-house server. At the same time, Sentis proposed reducing the number of in-house servers to two. That left the company with two virtualised servers running the four core business applications in a private cloud.”

In terms of disaster recovery, the private cloud provided onsite resilience and local recoverability, with additional Recovery as a Service (RaaS) being provided in a public cloud should both local servers fail.

Faced with green-lighting a solution that was a marked departure from the existing infrastructure meant really getting to grips with how this was going to work.

Shirley adds: “Ultimately it was going to be me presenting this to the board and it would be my name against the Cap-ex, so it was absolutely critical that I understood exactly what was proposed. As such, the project was rigorously planned and subsequently executed in three stages. At every stage, the methodology employed by Sentis allowed us to roll back to the previous stage in the event of any issues. After all, we needed to continue running the business while all this happened in the background.

“Part of the Sentis approach included meeting Andy Burns, our MD, and during that meeting, he made the business strategy for the coming five years absolutely clear. As the business progresses, we are focussing on growing our channels and supporting our customers. That will make us ever more reliant on Business Intelligence tools to help us plan and manage what is a very seasonally driven product range.

“The more I understood the Sentis solution, it became absolutely apparent that they grasped that 100%. The result is an infrastructure which offers incredible flexibility as we grow and evolve. Not only that, but our disaster recovery would get a serious boost. Up until we saw the Sentis proposal, we thought we were managing our risk well. We had an agreement in place with a trusted supplier to attend any issues in a fixed timeframe, but as Sentis pointed out, until something fails you don’t know how long that recovery will actually take.

“By virtualising our local environment and replicating that to a cloud disaster recovery environment, it meant that we could be up and running from the cloud in under 30 minutes, in the event of total failure.”

The Sentis solution was approved by the board and the net results have been better than the Stewart Company could have hoped for.

“What Sentis has delivered is fantastic. They have surpassed the requirements we originally had for our infrastructure and made annual savings well into five figures. We’ve also seen a threefold improvement in the performance of our SYSPRO ERP.

“Sentis Managed Solutions have exactly the right name in that they deliver a truly managed solution. For us that’s a solution that can help us and grow with us, not simply applications and services that they are bound to by virtue of pre-existing vendor relationships. That’s a refreshing and very welcome change.”

As Andy Burns MD of Stewarts commented: “Small enough to care, big enough to cope is an often-used tag line”.

“In partnering with Sentis we found that we benefited from their personal hands-on approach to achieve a seamless integration, and by having the appropriate level of resource assigned to the project they drove the critical path to successfully meet our tight timescales and deadlines for completion.”