"The Sentis team were very patient working with us. We managed to be very flexible and get a result that I’m extremely happy with." 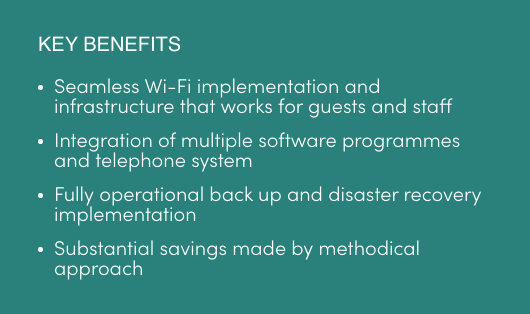 Stapleford Park Country House Hotel and Sporting Estate is a Grade 1 listed mansion, which originally dates back to 1086. It is surrounded by 500 acres of Capability Brown landscape in the rolling Leicestershire countryside.

Part of the Pride of Britain Group, the five-star establishment has 55 bedrooms, two self-contained guest cottages, a luxurious spa, a 2AA Rosette restaurant, a championship golf course and also hosts weddings, conferences and events all year round.

With such a diverse offering, Stapleford Park needs an IT solution that can deliver a seamless experience for both guests and staff.

Angelina Chua, General Manager at Stapleford Park explains why that is easier said than done. “The current house was built over a period of more than 500 years. The first part of the building was built in the 14th century and it was added onto over the centuries. In terms of our IT, it felt like we were replicating that approach insofar as our infrastructure was built up over time whereas it needed to be holistically integrated to make it work for today.

“The needs of the customer have also changed. We have extensively upgraded our facilities to offer more modern amenities for the 21st-century customers, while also maintaining the ageless hospitality of a five-star country house hotel.”

The core business applications that Stapleford Park needs to run include Opera PMS, Mitel telecoms system, Tiger project management software, Premier Spa, Micros ePoS and Microsoft Office 365. However, the various systems did not work as quickly as they should, nor did they integrate correctly.

It was becoming clear that Stapleford Park needed some help with their IT and, following a recommendation from a fellow Pride of Britain hotel, Angelina met with Neil Homer, Director at Sentis Managed Solutions.

Angelina continues: “I was looking for somebody to take over the IT of the hotel and I had spoken to a few potential vendors. Given the complexity of our requirements and the existing infrastructure being quite old, we wanted somebody that I felt comfortable with to be able to deliver our requirements. Sentis has a great pedigree in our industry and that gave me confidence in their abilities.”

Neil Homer picks up the story: “When we met Angelina and the team at Stapleford Park, it felt like they needed a fresh perspective. Successive attempts to upgrade part of the infrastructure meant that a lot of money had been invested in equipment that wasn’t being properly utilised.”

The first issue that Sentis needed to address was the cabling across the estate. Neil explains: “None of the upgrade work could be done until the network was sorted out. This involved new, dedicated network devices and reconfiguration of a number of network cabling issues.

“We also separated out the guest and corporate networks to ensure they complied with data security and also stopped network conflicts which were impacting staff PCs and guest Wi-Fi.

With the network issues resolved, Sentis could start work on the server infrastructure.

Neil continues: “We reviewed their applications and mapped out how we could migrate them onto a virtual platform. We opted for a new & fresh Active Directory and devised a new file structure that allows the business to comply with GDPR, meaning that they didn’t need to revisit data security at a later date. We then ensured this all worked with their Microsoft Office 365 suite and added a comprehensive backup and disaster recovery system.”

The final challenge was the full switch over of the core applications to the new virtualised platform, which took place in a one week window in January 2018. The challenge that Sentis and the team faced wasn’t lost on Neil: “Moving all of these critical business applications to a new network within a week was a tough challenge, but thanks to some very careful forward planning we successfully connected everything together.”

For Angelina and her team, the changes have had a big impact: “Now, the team can see that our systems work better and faster. It takes less time to carry out processes on our systems and services are far more joined up. For example with the new phone system, the cleaners can simply phone in to tell the Opera PMS system that the room is clean and ready. Overall, productivity is up.”

Stapleford Park also plays host to a large number of corporate guests and the technology on-site needs to support that. For Angelina, this audience’s needs are just as important as overnight guests: “Although we are a resort, we host a lot of corporate business meetings so having the right IT requirements and consistent, high-quality Wi-Fi that works is very important for us.”

Neil concludes: “It’s been really satisfying to move Stapleford Park from a position of underutilised equipment and an ageing network to a brand-new IT platform, completely new security model and a new virtualised platform to run all of their critical business applications.”

Angelina is delighted with the end result: “Neil and his team were very patient working with us to systematically put things in place and between us, we managed to be very flexible and get to the end result that I’m extremely happy with.”